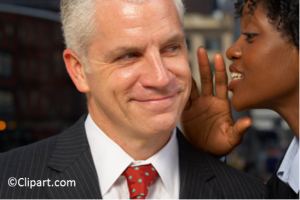 “Did you hear about Ryan’s performance review? He’ll be lucky if he isn’t fired soon!”

Would that make you perk your ears up?

Gossip is a rampant problem in organizations of all sizes. Some organizations have a very strong policy against it, to the point of someone being possibly fired if caught participating. It can be a cancer that will ruin your team, but even the best people can get caught up in it. Why?

There are a few reasons why participating in gossip is the “easier choice” for people, even if they truly believe it is not a good practice.
Need for acceptance. It’s perhaps counterintuitive, because after all, gossip by nature alienates someone. But for those doing the gossiping, there is some satisfaction in knowing that someone else sees a situation or another person the same way or has experienced the same problems with them. In the illustration above, if several coworkers have problems getting along with Ryan, they may unite in the gossip about his review.
“I’m glad I’m not the only one that suspects Ryan may not have his job for much longer.”
Desire for information. Gossip can arise when there are holes in communication or a feeling of “We’re not being told the whole truth.” People will start to fill in holes by brainstorming possibilities, and we all know where that can lead. False conclusions or imaginary scenarios become “fact” as more people hear about them.  “

“Ryan sure looked troubled when he left the bosses office. I’m sure the company must be considering layoffs, and Ryan is the first.”

Feeling of inadequacy. Though we don’t like to admit it, deep down many of us are fully aware of what we believe are inadequacies or weaknesses. When we hear about the alleged behavior of someone, we feel a little better when we think, “I would never have done that!” If someone concurs by mentioning the same thing, we feel particularly validated in our own sense of right and wrong.
“I hope they brought up his frequent lateness. I would never clock in 30 minutes late every day.”

The reasons given above do not justify gossip, nor am I suggesting you should simply tolerate it. However, it is wise to consider the “why” behind behavior–whether it’s yours or others. What is going on in people’s minds and hearts that leads them to speak ill of co-workers or the organization? This can be a first step in helping you develop a more effective way to deal with the issue before it poisons your team.  Determine now that you, as a value-centered professional, won’t participate in it.