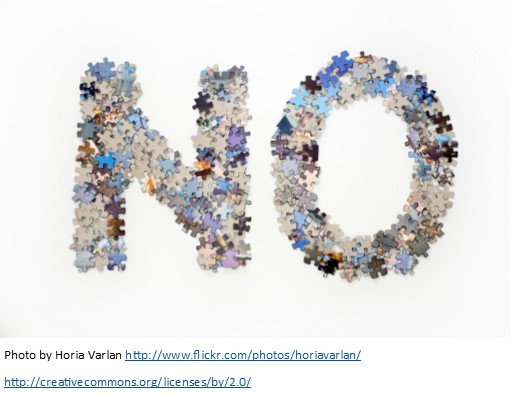 I was chatting on social media with a friend—let’s call her Angelica—and asked if she wanted to help me with a project. She replied, “No.”

Then she added, “But thank you for asking me.”

I admit I was briefly taken aback. Moments before, Angelica had just agreed to help me with a different task, one that was related to the latest idea I had suggested. However, the second idea would be more of an ongoing commitment, and she said, “No.”

I told Angelica that I respected her decision and thought it was great that she felt comfortable saying “no.”  She said that “old age” had helped her with this–I responded “not old age…maturity.”

“No” is one of the hardest words to say. Why?

However, if we don’t say this word enough, we can end up disillusioned, disappointed or exhausted.

There are ways to say no graciously and effectively. Angelica did it. Here’s how:

She understood her life.

Angelica was able to discern pretty quickly whether my request would fit into her current season of life. That tells me she was keeping an informed perspective of her opinions, commitments and relationships.

She gave an immediate answer.

Angelica didn’t hesitate or string me along. It made the outcome quick and relatively painless.

That’s not to say that we should always answer quickly. It’s completely appropriate to tell someone you want to think about it, IF you give them the courtesy of a self-imposed deadline. For example, she could have said, “I’d like to think about this. Can I give you my answer Friday?” and then be sure to give the answer on Friday or before. It wasn’t necessary in this case because of her confidence in her decision, but if she needed a little time, that would have been fine.

Angelica understood that it is an honor to be invited to participate in an event or project. The requester is somewhat vulnerable when extending the invitation, risking rejection. By saying “thank you” she acknowledged that she appreciated being considered, which softens any possibility of coming across as rejecting the person doing the inviting.

She didn’t give an explanation.

Angelica gave a simple “No, thank you.” She did not feel compelled to explain or rationalize her decision. I admire that. I tend to provide more information than necessary and would do well to just provide a simple answer more often.

“No” isn’t easy to say, but it often makes your life easier!

Question: Do you find it difficult to say “no?”