It was about 2 in the morning when I realized the power had gone off. It was early Monday morning…the day that usually the busiest for HOPE Unlimited. The steady, sometimes heavy, rain continued, and by 5:00, when my day would normally start, the power was still off.

The power came on at 9:35, a full 4.5 hours later than my day would have started. I essentially lost a third of my day already, and on a day that already tended to have a large list.

I could do nothing but be flexible. I admit I wasn’t thrilled, but I survived. Here are a few flexibility tools I drew from.

When the power came on, I modified my routine. I decided to still go through some of the “morning motions” that are important foundations for my days. I did shorten or skip some, as appropriate though.

The key to the day was adapting. There are going to be things that happen out of your control. I’m all for making a reasonable plan for the day, using schedules and having lists. But unless we accept that our plans are mainly guidelines, we are going to live in a frustrated state most of the time. Maybe it’s better to start the day with an attitude of holding our plans loosely enough that if we need to adapt, we won’t over-stress about it.

I’ve created a fun coloring sheet to reinforce this concept. Sign up below to get it! 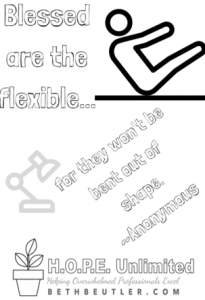